Are we winning the battle against violence in U.S. hospitals?  The IAHSS-Foundation’s 2016 Healthcare Crime Survey, published in May, seems to indicate that we may be on the right path.  From 2012 to 2014, the recent Healthcare Crime Survey observed a steady increase in the frequency of violent crime (murder, rape, robbery, and aggravated assault), followed by a sudden and notable drop in 2015, as illustrated below.  Among the four types of violent crime, aggravated assault is reported with the highest frequency in U.S. hospitals. 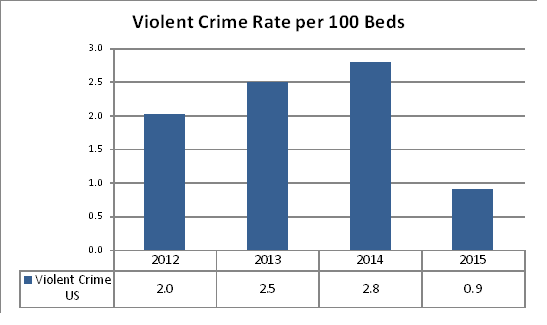 Since the release of the Crime Survey, the most common question posed by healthcare journalists and hospital security professionals is “what caused the significant drop in violent crime?”  My response as the author (data cruncher) of the IAHSS-Foundation’s Healthcare Crime Survey has been admittedly sterile as I explain the three possible reasons for the decline:

The first possible explanation is luck.  The violent crime rate dropped by no fault of our own.  That is, our security efforts did not cause the decline.  A second explanation is that different hospitals responded compared to prior years.  Since the Crime Survey is voluntary, we use sampling to collect data for the report.  In other words, the 300+ hospitals that responded last year are not the same 300+ hospitals that responded this year.  As is common in crime statistical analysis, we mitigate this by using crime rates (number of crimes/number of hospital beds) as opposed to just the number of reported crimes.  Using crime rates is better than using absolute crime levels, but it’s not perfect.  The third possible reason is that our security and workplace violence prevention programs are effective.  No doubt, this is our collective hope.

However, to only look at the violent crime rate drop is a mistake as the 2016 Crime Survey also showed that the rate of assaults increased in U.S. hospitals. 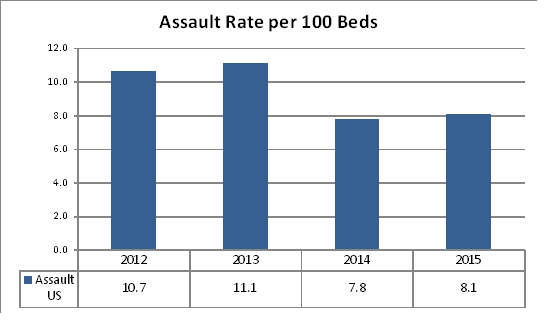 What is the difference between assault and aggravated assault?  When surveying U.S. hospitals, we use the Federal Bureau of Investigation’s Uniform Crime Report definitions:

In looking at these definitions in depth, we can refine one our possible explanations.   That is, our security and workplace violence prevention programs may have improved, that we have been effective in reducing the number of incidents in which a weapon was used or serious bodily harm occurred.  In other words, improved security resulted in fewer aggravated assaults.  Those combative patient events who are de-escalated by staff and Security Officers may be assaults, but never rise to the level of an aggravated assault because of the de-escalation techniques.  Perhaps a Security Officer‘s diligence kept a weapon out of the emergency department and a nurse finished her shift without injury.  This seems plausible, but I won’t be convinced until we see this trend continue for a couple more years or we evaluate more data.  The IAHSS-Foundation has researchers on standby ready to take a deep dive into your hospital’s security metrics.  Any volunteers?

What about the one trend that has remained absolutely consistent during each year of the IAHSS-Foundation’s Crime Survey – – the majority of assaults and aggravated assaults in U.S. hospitals are perpetrated by patients or hospital visitors against staff.  Nowadays, we call this Workplace Violence Type 2 (and we sound smarter because of it).

The two graphs below from the recent Crime Survey illustrate the continuing domination of Type 2 incidents. 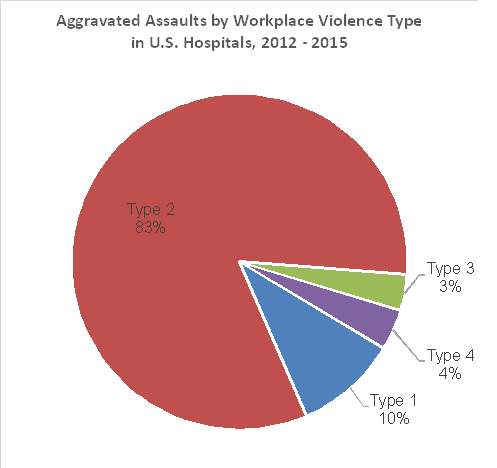 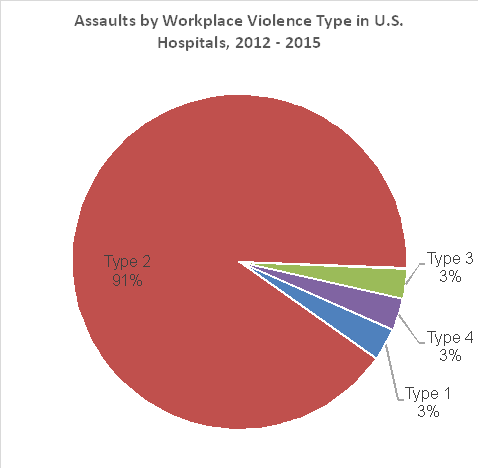